Interstate Transmission of COVID-19 Is Now Most Urgent Threat

Interstate transmission of the novel coronavirus that causes COVID-19 is now a much greater public health threat in the United States than cases coming into the country via international travel, a new study led by researchers at the Yale School of Public Health finds.

“Domestic spread of the virus has serious policy implications,” said Assistant Professor Nathan Grubaugh, a genomic epidemiologist at the Yale School of Public Health and the study’s senior author. “We must shift our focus to improving local disease surveillance rather than banning international travel. This is no longer a ‘foreign’ virus.”

The findings underscore a critical need for more widespread diagnostic testing for COVID-19 at the state level as well as more intense tracking of individuals who may have been exposed to SARS-CoV-2, the highly infectious virus that causes COVID-19.

Public health officials rely on these disease surveillance measures to determine exactly how and where the virus is spreading within the United States in order to target their efforts and prevent additional outbreaks.

“If interstate introductions (of the virus) are not curtailed in the U.S. with improved surveillance measures, more robust diagnostic capabilities, and proper clinical care, quelling local transmission between states will be a Sisyphean task,” the scientists wrote in their report. 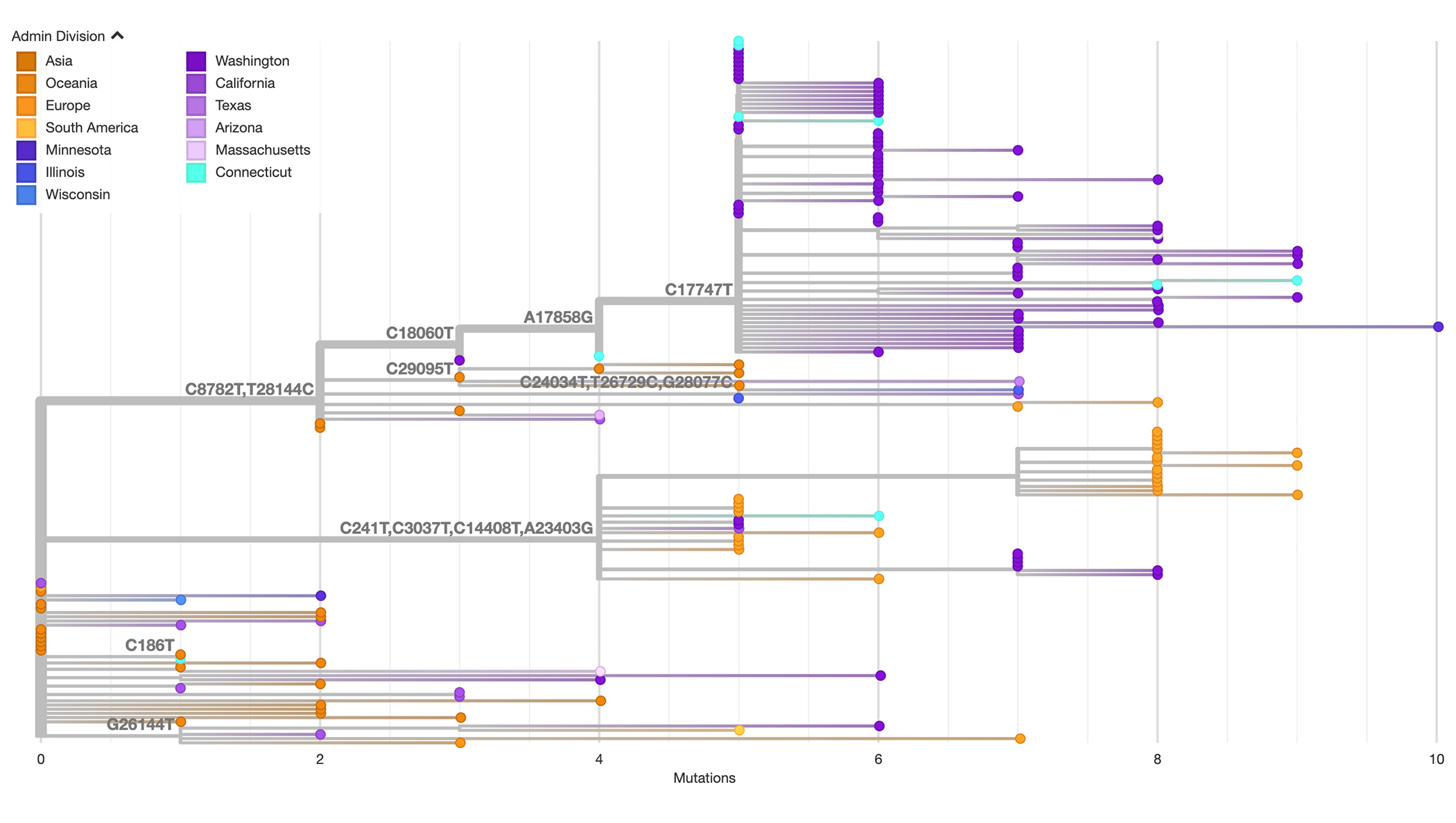 The researchers based their findings on a genomic analysis of nine virus samples collected from some of Connecticut’s first COVID-19 patients in mid-March. Using genomic epidemiology, they sequenced the unique genetic code or ‘signature’ for each sample. They then compared that Connecticut data to the known signatures of 168 sequenced genomes for SARS-CoV-2 from the United States and around the world.

The study found that most of Connecticut’s virus samples were more closely linked to outbreaks in other states than international locations such as Europe and China.

Most importantly, seven of the nine Connecticut samples were clustered with known virus genomes from Washington state. This provides evidence that transcontinental spread of the virus was already happening between the West Coast and East Coast as early as mid-March, despite federal international travel bans that were put in place starting in late January.

The researchers then coupled their genomic analysis with airline travel data from three major airports in the region (Bradley International, Logan International and JFK). They used mathematical models and epidemiological dynamics to estimate the risks posed by both domestic and international travelers in spreading infection.

The study found that due to the large volume of daily domestic air travel and the rising number of COVID-19 cases in the United States, the dominant risk of virus importation into southern New England switched from international to domestic travel by mid-March.

“The large volumes of daily travel within the U.S. indicate that domestic spread of SARS-CoV-2 has become, and will likely continue to be, the primary source of new infections,” said Joseph Fauver and Mary Petrone, two researchers from Grubaugh’s lab who served as the study’s lead authors. “We suspect that this transition from international to domestic dominance for risk will happen elsewhere in the country as more states start experiencing higher burdens of COVID-19 disease.”

Fauver, a post-doc, and Petrone, a doctoral student, point out that their analysis for infection risk only accounts for air travel. If train and automobile travel were included—particularly in the highly populated corridor between Washington, D.C., New York City and Boston–it would likely heighten the risk of domestic transmission even more.

Given the findings, the researchers believe a unified effort to detect and prevent new COVID-19 cases is now absolutely essential for the United States to reduce the risk of future domestic outbreaks.

“If spread between states is now common, as our results indicate, the U.S. will struggle to control COVID-19 in absence of a unified surveillance strategy,” the study said.

A pre-print version of the study, which is currently undergoing peer review, can be found on MedRxIV.

The study involved a large collaborative effort featuring multiple groups across Yale including researchers from the Yale School of Medicine, and the departments of molecular biophysics and biochemistry, ecology & evolutionary biology, immunobiology, pediatrics and internal medicine. Scientists from the Yale School of Nursing and the Yale Institute of Global Health also contributed as well as researchers from labs in Washington state, Maryland, Switzerland, Canada and the United Kingdom.