At a time when municipalities across the country are reviewing police department funding, a new report shows that harmful police practices are one of the biggest barriers preventing street-based sex workers in New Haven, Connecticut, from accessing vital social services.

The report was compiled by the Yale Global Health Justice Partnership (GHJP) in collaboration with the Sex Workers and Allies Network (SWAN), a New Haven-based harm reduction and advocacy group. It recommends diverting funds from law enforcement and investing them in social service organizations.

Doing so, the report said, would help street-based sex workers connect with local social service programs capable of addressing their individual needs such as shelter, food, substance abuse treatment and stable employment in an appropriate, meaningful and respectful way.

“The vulnerabilities detailed in this report are not foregone conclusions but rather the result of policies and practices that we have the ability, incentive and ethical obligation to change,” said former GHJP Clinical Fellow Poonam Daryani, who helped supervise the research. “Addressing the marginalization of sex workers requires confronting the systems that perpetuate violence and inequity in our communities.”

The Global Health Justice Partnership is a program hosted jointly by the Yale School of Public Health and Yale Law School. The partnership tackles contemporary problems at the intersection of global health, human rights and social justice. The GHJP offers a practicum course each year that engages Yale public health and law students in real-world projects with scholars, activists, lawyers and other practitioners of social and health justice.

The report, Mistreatment and Missed Opportunities: How Street-Based Sex Workers are Overpoliced and Underserved in New Haven, CT, is based on a needs assessment survey conducted by SWAN among 49 of its members. Respondents ranged in age from 22 to 61. Yale students preformed background research, developed the survey and analyzed the results under guidance from GHJP faculty, staff and SWAN.

Among the report’s key findings were:

“No one asks people on the street what they need,” said Beatrice Codianni, SWAN’s executive director, explaining the organization’s motivation for the survey. “Until people understand how sex workers have been denied services and neglected by our systems, we can’t solve anything.”

Codianni and other leaders at SWAN began collaborating with the GHJP in November 2016 following the arrest of 14 alleged sex workers in New Haven as the result of a law enforcement sting. SWAN wanted to document the experience of community sex workers and identify service gaps and barriers to community and state aid. In the report, SWAN and the GHJP list specific strategies to eliminate those barriers and provide local policymakers with a road map for future harm reduction, such as expanding access to the overdose prevention medication Naloxone. The report also provides recommendations to address sex care workers’ housing and health care needs as well as ways law enforcement practices can be amended to improve outcomes for community sex workers.

“We’re dismissing human beings by ignoring their voices — and that is what we hoped this survey would start to change” said Codianni. “It’s a wakeup call to other service providers and the city of New Haven. We hope they will act on the report’s recommendations and reach out to SWAN to figure out how we can better work together to support the safety and health of sex workers in New Haven.”

The report notes that while well-intended, police-driven diversion programs for so-called “quality of life” criminal charges, such as those associated with sex work, drug use and homelessness, often fail and are not appropriate for connecting sex workers with social services, medical care or other forms of welfare. A more effective approach would be to decriminalize consensual sex work and invest more resources in community-led assistance programs unaffiliated with the legal system, the report said. 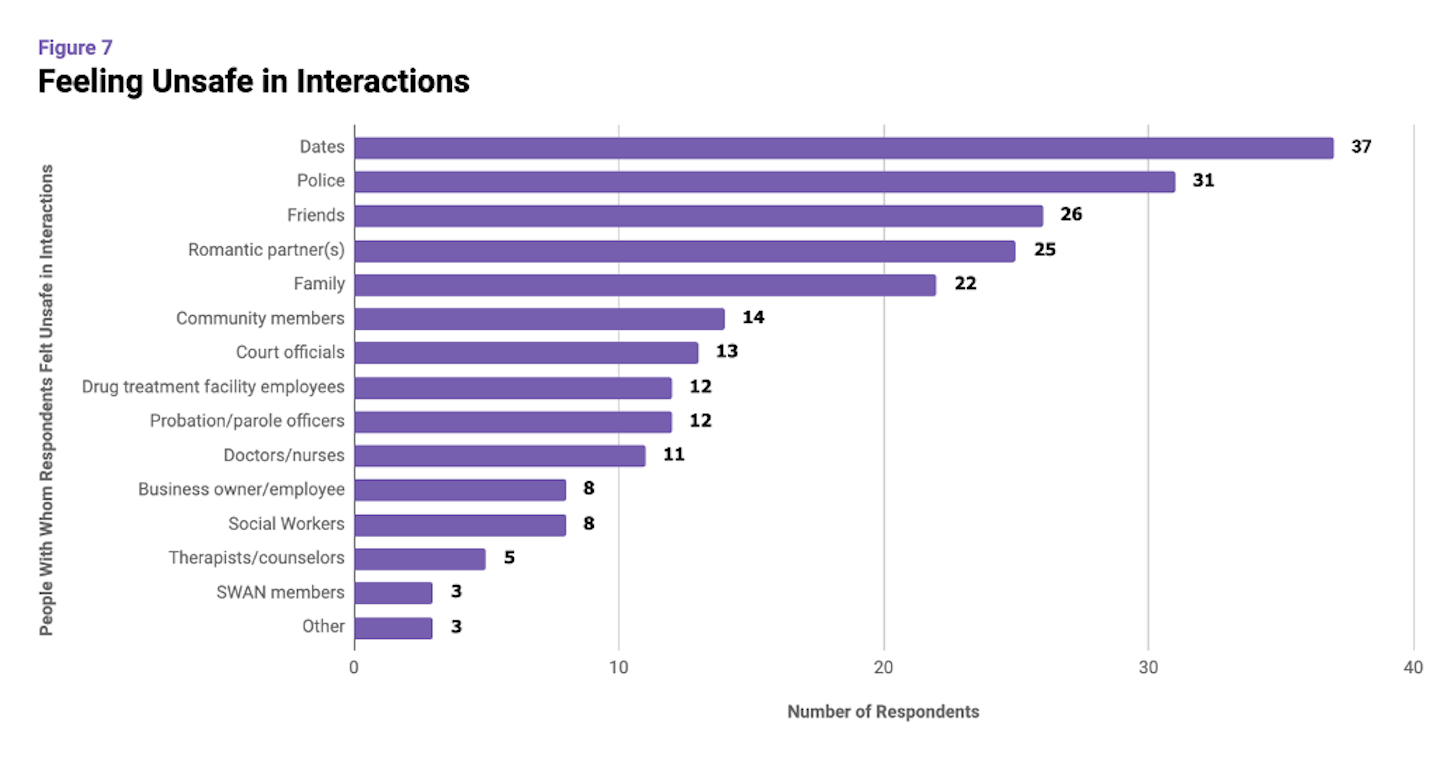 Submitted by Colin Poitras on September 10, 2020

Respectfully and Ethically: How the Sex Workers Study Was Done

Yale School of Public Health Assistant Clinical Professor Alice “Ali” Miller, co-director of the Global Health Justice Partnership (GHJP), said that from the beginning, the GHJP’s intent was to engage with SWAN in “a respectful, ethical and politically-conscious way and to generate a report that was meaningful and grounded in common sense rather than rhetoric.”

“We consider current and former sex workers to be experts of their own experience who speak in their own voice,” said Miller, who is also an associate professor (adjunct) of law at Yale Law School. “As researchers and academics, we do not override their opinions and we do not speak and act for them.”

The goal of the report was to gather information to help SWAN and its allies focus their advocacy and to collect evidence for potential revisions to policies, practices and programs impacting sex workers.

Survey respondents were primarily white and Latina cisgender women and do not reflect the entirety of New Haven’s sex worker community, street-based or otherwise. Due to those and other limitations, the report was not submitted to a scientific journal for publication. It did, however, undergo several rounds of scholarly review by external experts, both academic and program oriented, who validated the scientific rigor of the research based on their select knowledge of the scientific literature, experience in health justice analysis and familiarity with New Haven service programming.

Yale School of Public Health student Mariah Frank, MPH ’21, said working on the project helped her realize how research can be applied in different ways.

“Even though this report does not rise to the gold standard of scientific rigor, that does not mean it doesn’t have important things to say,” said Frank, whose background is in chemistry. “These workers’ experiences are incredibly important, and people need to be paying attention to them because they know better than anyone what they need and what is missing from the landscape in New Haven. I think that perspective is a really important lesson for people working in public health.”

“Even if it takes more time and energy, it is always important and necessary to center community voices and leadership in any research or public health work,” said Muraleetharan. “Particularly among long-marginalized communities like sex workers, I strongly believe that this critical framework is the only way to do public health.”

Muraleetharan said her experience with the GHJP solidified her commitment to working in global sexual and reproductive health after graduation. She is currently a research consultant with Project Shikamana, a community empowerment-based HIV prevention effort among female sex workers in Tanzania.

YSPH alumna Taiga Christie. MPH ’19, found SWAN’s determination to conduct its own assessment of its members’ needs to bring attention to issues impacting a marginalized community inspiring. Rather than rely on anecdotal evidence, the group sought to collect data that could be presented to policymakers and community organizations to improve services.

“SWAN’s decision to pursue a peer-based survey that both generated data and valued the lived experiences of the people being impacted was really revolutionary to me,” said Christie, who helped develop the survey when she was a student and who currently serves as the GHJP’s advisor on local projects. “SWAN, and other organizations like it, are realizing their needs are getting left out of the scientific literature and deciding do things for themselves. That was a unique experience for me at Yale and I appreciate getting to learn from that.”

As for next steps, Francesca Maviglia, MPH ’20, said the GHJP is working with SWAN to disseminate the report to local service organizations, community leaders and other parties locally and nationally. The students crafted a series of one-page fact sheets on different legal approaches to the sex sector, the differences between sex work and sex trafficking, and the consequences of criminalizing sex work to amplify key findings. The fact sheets are intended to dispel common misconceptions about sex work and to help the public and policymakers appreciate the unjustifiably deleterious impacts of criminalization on sex workers, their families, and their communities.

“There is so much mystification around sex work, so much speculation and so much stereotyping and stigma that makes people think sex workers are a separate category from everyone else,” said Maviglia, a current GHJP fellow. “One of the takeaways we hope people will have from this report is that the lives of sex workers are a lot like the lives of other people who are struggling with housing security or food insecurity or who are working multiple jobs. Our report attempts to paint a more nuanced and complex picture of what street-based sex work really is.”

The project was supported in part by a grant from the Open Society Policy Center. It is also an initiative of the Gruber Project for Global Justice and Women’s Rights.