It has been generations since a world event enveloped us all in a shared trauma that motivates so many people to volunteer their time, shift career priorities and do their part. The COVID-19 pandemic’s lack of respect for borders and boundaries has also led to innovative and collaborative new partnerships for public health and the Yale community.

One example is the animated motion graphic public service announcement, mRNA Vaccines- How the COVID mRNA vaccines work, addressing COVID-19 vaccination that involved individuals from four Yale professional schools and creative talent from both Colombia and the United States. 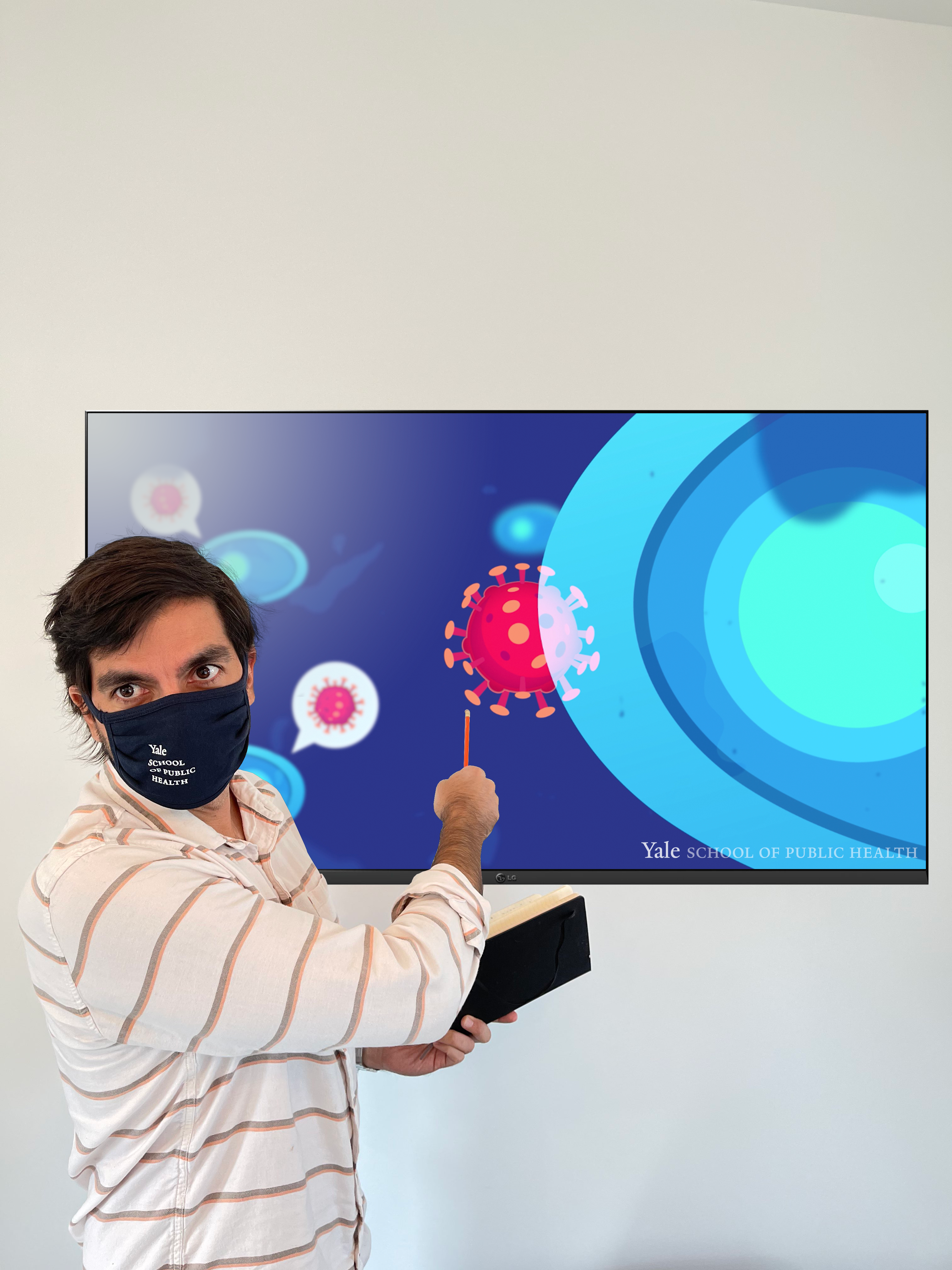 The project was started by Colombian entrepreneur Enrique Sánchez-Rivera, who was frustrated by the high volume of misinformation and lack of attention to science over the last four years that created serious problems domestically and abroad. Sánchez-Rivera, who will be attending the Yale School of Management’s Global Executive Leadership program in the fall of 2021, is founder and CEO of Augmented Island Studios, a virtual and augmented reality development studio based in Portland, Oregon. While waiting for the executive leadership program to start, Sánchez-Rivera has already engaged with the Yale community — studying French with doctoral candidate Walid Bouchakour and participating in the Yale Blended Reality group as a speaker.

When the pandemic started, the number of conspiracy theories about the disease increased exponentially, Sánchez-Rivera said. “I have been extremely concerned for those who are at high risk and for communities who are highly vulnerable,” he said. “In addition, my concern grew deeper when I started hearing folks from all socioeconomic backgrounds believing in wild and inaccurate stories and not in science.”

Knowing Yale’s culture of creativity and collaboration, Sánchez-Rivera reached out to the Yale School of Public Health about producing an educational motion-graphic public service announcement about COVID-19.

Yale School of Public Health Lecturer Andrew Heinrich, J.D., M.Phil, quickly agreed to be the scientific and public health advisor for the project and wrote the script. Heinrich is a new faculty member in the Yale School of Public Health’s Department of Health Policy and Management, where he specializes in regulatory affairs, global health and behavioral sciences. He also has deep roots in philanthropy and community development as the founder of Project Rousseau, an educational nonprofit; and through his affiliations with the Haskell Foundation, PARC Adventures Monaco and other ventures. “The research we do at YSPH has a real-world impact, and I have the great privilege of being a part of that translation between research and practice–and back to subsequent research — on a daily basis.”

Stan Mathabane is a theater sound designer studying in the Yale Drama School and CEO of SunSon Records. Adapting to physical distancing, he became increasingly involved in extended reality (XR) design of 3D sound. Through an online networking channel at Yale that brings together people working in blended reality, Mathabane met Sánchez-Rivera who recognized the synergy of his work with the augmented reality work being produced by his company. Mathabane wrote and recorded the background music for the vaccine video.

A native of Colombia, Sánchez-Rivera is acutely aware of the international need for accurate and accessible information on COVID vaccines. Aiming for a video that could be shared in every corner of the world, he currently has versions in English, Spanish, French and Arabic. Through closed-captioning, other translations are possible in the future.

Walid Bouchakour, a third-year Ph.D. candidate in the Yale Department of French, helped with the French and Arabic translations, and Craig Osterbrock, also a Ph.D. student, helped with the Spanish version.

Born and raised in Algiers, Bouchakour worked as a journalist before coming to study at Yale. He, too, is deeply concerned about the misinformation, disinformation and conspiracy theories circulating online about the COVID vaccine, not only in the U.S., but also in France, Africa and the Arab world.

“Something has to be done to fight back this wave of misinformation. And this project was the perfect occasion for me to do my part,” says Bouchakour. “I think that a short, animated video with a simple and clear message is the perfect format. Most of the time, you have either a very good, long and complex science-based article or short, impactful videos spreading misinformation. So why not create a short, impactful video to spread factual scientific information?”